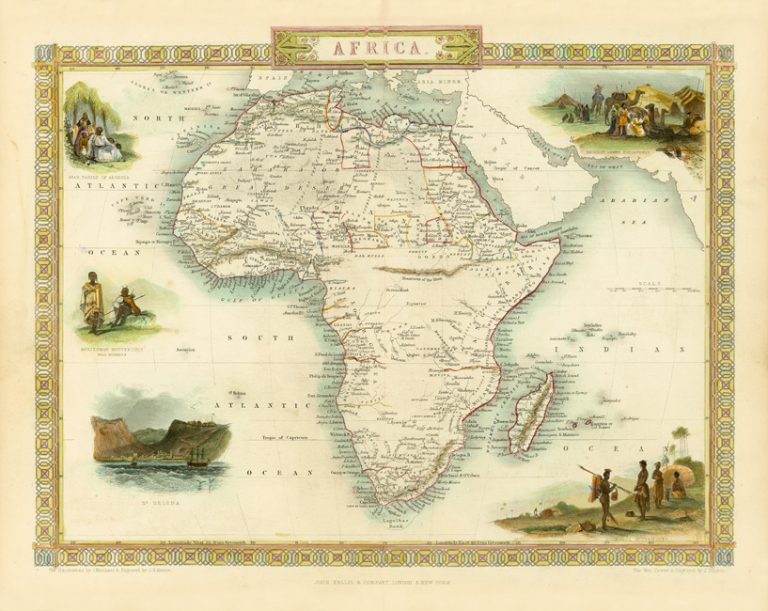 John Tallis is considered to be one of the most renowned cartographers and publishers of the 19th century. His work is considered to be the last of the lavishly decorated and ornamental maps. John’s maps are geographical maps that can be classified as works of art.

Tallis’ maps represent the end of an era when atlases were produced with a grand and decorative style. Tallis is renowned for the small illustrations that are arranged throughout his maps.  These illustrations would depict foreign scenes and be carefully arranged.  Tallis maps were created for the high demand for foreign exotica which was in high demand at the time (mid 19th century).

Tallis released the Illustrated Atlas of the World in various parts from 1849 to 1853. Each part was first sold in America then sold in Australia and other British Colonies in 1854.

The cartography was both drawn and engraved by John Rapkin. Map publishers paid for access to information concerning newly charted coastlines. They also used maps published previously by others.

Tallis maps used the print medium of steel engraving. The mirror image of a map’s outline and text were drawn on a sheet of hard steel. The plate would then be spread with ink and the excess wiped off leaving ink only in the grooves. A piece of paper was then soaked in water so as to become stretched and capable of squeezing into the grooves of the plate. It was then laid over the steel plate and rolled through a press leaving the ink in a reverse image to the steel plate.

Tallis & Co employed various artists throughout the years to process their trademark vignettes. They were generally artists trained in topographical tradition from provincial areas and, as was the trend in the 1820s and 1830s, came to London to apprentice themselves to a master engraver.

The Tallis maps are highly valued in Australia, especially the series of the individual colonies. They were the only decorative maps produced of the early colony showing internal detail: the map of Victoria depicts the substantial areas of gold mining, hand-colored in yellow, for example.