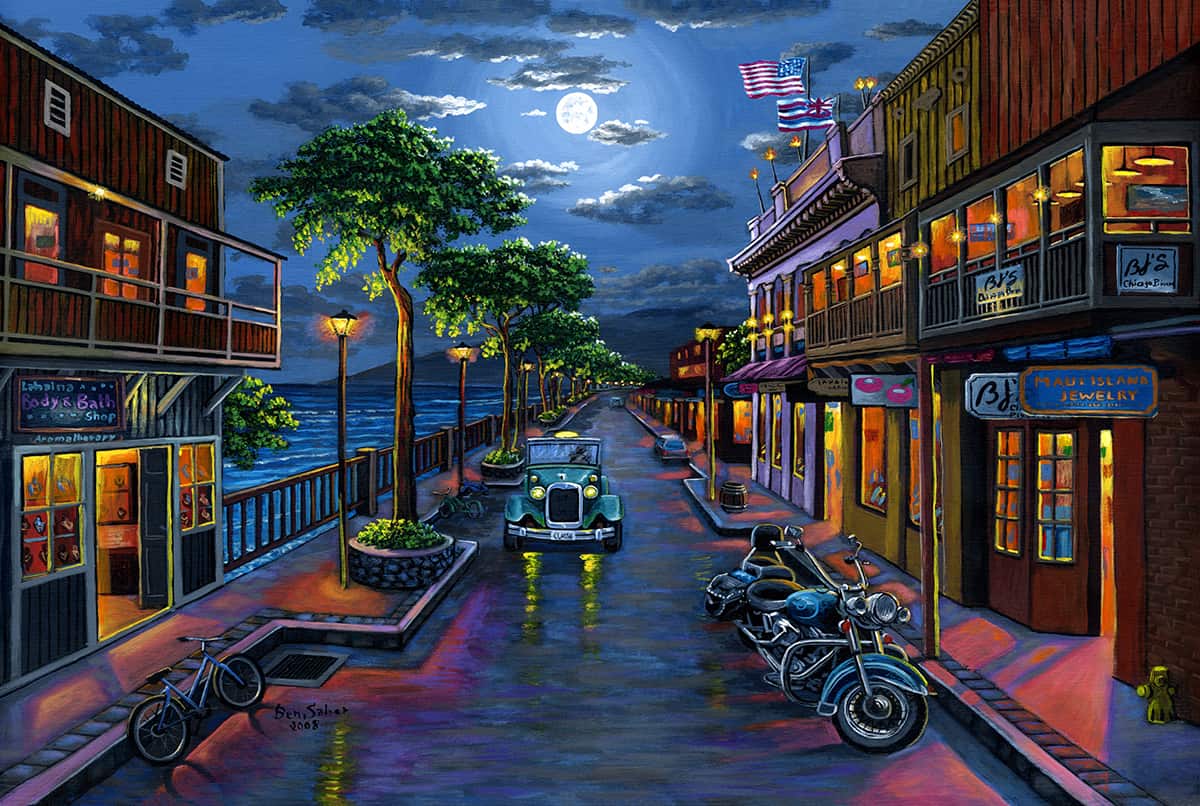 You can feel the Nostalgia as you view Ben Saber’s vibrant world of Maui with his masterful Acrylic paintings as Gicleés or originals.  My personal favorite painting from Ben Saber’s collection is Front Street Moon.  As a Maui native, I have many memories at Front Street, Ben Saber’s perspective gives a beautiful perspective of the nightlife on the Historic Front Street.  Not much has changed on Front Street in this nostalgic aside from a few objects.  Can you spot the differences from modern-day Front Street?

As a child in France, Benjamin’s gift was recognized by his teachers, and under their tutelage, he received training and more importantly encouragement. Artist Saber discovered his artistic gift at an early age in elementary school when he was asked to do chalk drawing demonstrations in the classrooms by his teacher. Saber grew up in a family of artists. His father was a portrait and calligraphy master and his brothers were talented but none of them pursued an art career.

Later in high school Saber was invited to join his art teacher in his studio as an apprentice during the summer vacations. Then, after some training, demand for his art developed starting mostly from relatives and neighbors for local landscapes and portraits.  Saber took some summer art classes from talented artists. He gained a lot of knowledge that improved his painting skills. However, most of his learning came from painting outdoors.

By painting on location he was able to capture many aspects of the landscape as the light changed during the day and the seasons. Nature was and still his best teacher.

Artist Saber attracted a big crowd every time he did a painting demonstration in public. Many of his paintings were sold to people walking by and only a handful in a gallery a long time ago. The following is a picture of Ben Saber painting at Front Street in 2006.

In 1977 as a young man, Ben moved to Washington D.C. and traveled to the South, the Midwest, and the Pacific Northwest.  He continued his studies at the University of Washington, where he studied under Jacob Lawrence.  However, Seattle’s inclement climate stifled Ben’s penchant for plain air, so he moved to Hawaii.  He traveled the island painting as he went until he finally settled in Maui in 1995.

There he achieved considerable success with his bright, affordable impressionistic images.  “If people feel good when they view my paintings, then we share a common enthusiasm.  I portray my visions on canvas with a degree of artistic license.  Why not?  Otherwise, I might just as well take photographs.  I am definitely not a realist.  If you must classify me, I would describe myself as a romantic modern impressionist.”

A naturalized American, Ben continues to travel to paint the Hawaiian islands and other parts of the country.  He maintains a studio in Kingsville, Texas.  He dedicates his time to painting and in the process of creating beautiful landscapes and teaching others what he learned over the years. The following is a video of Ben Saber painting The Moon Light Beach.

Lahaina Printsellers offers over 20 of Ben Saber’s work as originals and as high-quality giclee.

A giclée print is quite simply the closest replication of an original artwork that is currently possible. The name comes from the French word GICLEE (pronounced Zhee-Clay) which means “spray”. At Lahaina Printsellers we create our own giclées, employing state of the art equipment and professional designers who are skilled in the digital arts.