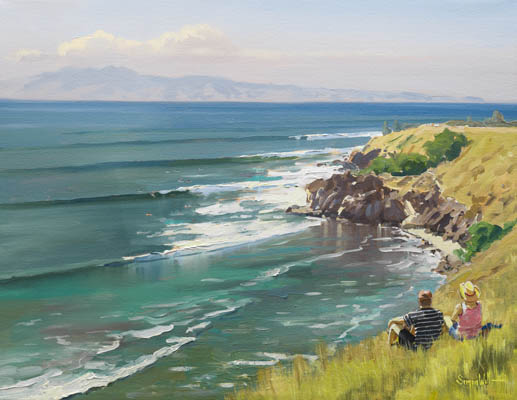 If you are looking for a sandy beach, Honolua Bay would not be what you are looking for.  However, the bay is a popular spot for snorkeling.  The beach itself is a narrow path of boulders and sand with the water being the focus.  Reaching the bay is a short trek in itself as you would need to park your car on the highway and take a 5-minute walk through a vine filled valley.

This beautiful bay has been able to avoid any significant commercial development due to the community’s activism.  So a natural sense of magic is still relevant in this area. Snorkeling is usually the main activity of choice in the area, however, surfers flock to the area during the winter season for its swells. The bay is also a great place to watch the sunset or spot for Humpback whales during the winter.

Simon Williams brings this breathtaking view in his art piece, Surf Break View Honolua. As a former long-time Maui resident, the internationally acclaimed Master of Oils and colors, Simon brings his memories of Maui to life.

Simon Williams was born in Dunedin in 1961. He grew up in Mosgiel serving an apprenticeship in horticulture and landscape gardening. During the 1980s Simon lived and worked in Europe where he began painting. Originally influenced by Australia’s Heidelberg School of artists. Mr. Williams has been the recipient of numerous juried art prizes and routinely shows in both joint and solo exhibitions.

Living in Auckland since 1994 Simon exhibits annually with International Art Center. Simon’s work has featured in every edition of “New Zealand’s Favorite Artists” and hangs in embassies and collections worldwide Including that of former President Bill Clinton. Simon visits Maui regularly and his work succeeds brilliantly in capturing the essence of the panoramic harbors, bays, and beaches that he depicts. His paintings reflect his delight for outdoor life.

The Maui Expert.  2019. Retrieved from:  https://www.themauiexpert.com/best-beaches-in-maui-honolua-bay