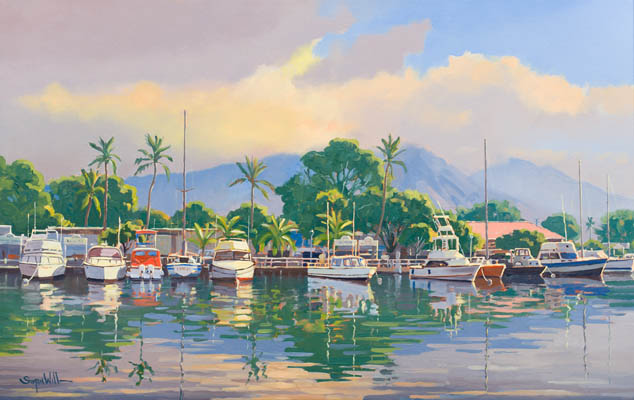 Lahaina Harbor is located in downtown Lahaina off of Front Street behind the large banyan and in front of the Pioneer Inn.  Ocean adventures include some of the best sportfishing, sailing, diving, and whale-watching in the world. Pretty nice sunsets too! Snorkel and Diving adventures can bring you close to dolphins, green sea turtles
and humpback whales during the winter.

Simon Williams was born in Duned in 1961. He grew up in Mosgiel serving an apprenticeship in horticulture and landscape gardening. During the 1980s Simon lived and worked in Europe where he began painting. Originally influenced by Australia’s Heidelberg School of artists. Mr. Williams has been the recipient of numerous juried art prizes and routinely shows in both joint and solo exhibitions.

Living in Auckland since 1994 Simon exhibits annually with International Art Center. Simon’s work has featured in every edition of “New Zealand’s Favorite Artists” and hangs in embassies and collections worldwide Including that of former President Bill Clinton. Simon visits Maui regularly and his work succeeds brilliantly in capturing the essence of the panoramic harbors, bays, and beaches that he depicts. His paintings reflect his delight for outdoor life.