The First Complete Map Of The World

Home / Uncategorized / The First Complete Map Of The World

The First Complete Map Of The World 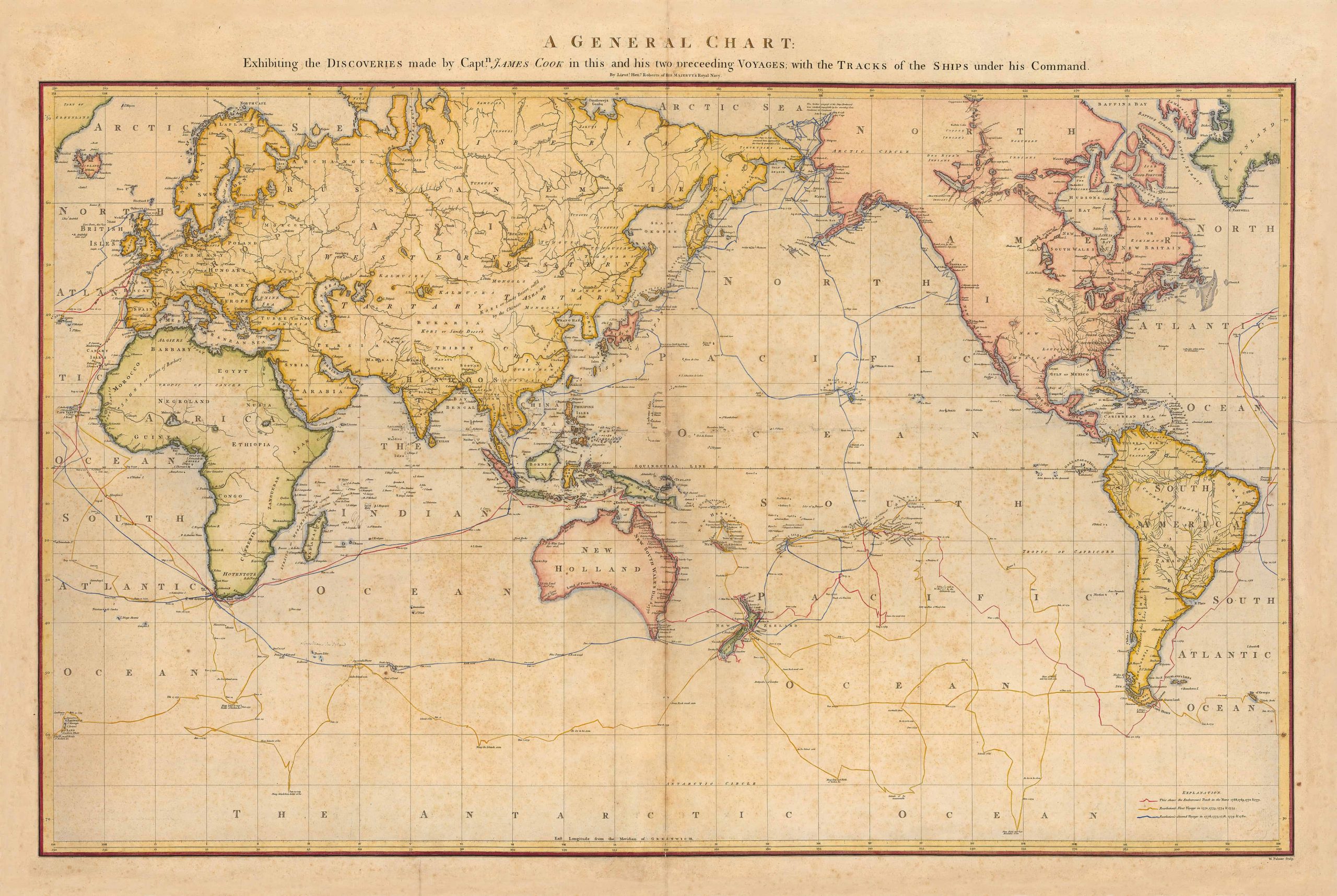 The 1784 Cook General Chart by Capt. James Cook is the first map of the world with any sort of true accuracy. This is the most important and accurate world chart of the 18th century. World maps that were created during this era had incomplete glimpses of the Pacific region. Captain James Cook was able to map out the Pacific Region in a span of 11 years from 1769 to 1780 through his three voyages which he traveled a hundred thousand miles.  Lahaina Printsellers has an original copperplate engraving from Cook’s last voyage, originally published in 1784 by Strahan & Cadell of London.

This map was the first great map to identify what was called the “New Discoveries” was Capt. James Cook’s huge General Chart published London in 1784 as part of his great third voyage atlas. Most people know Cook’s name, but what is not widely known is how much of the Pacific was first charted by Captain Cook during his three famous expeditions during the eighteenth century. In these three voyages from 1768 – 1779, Cook traversed vast expanses of the Pacific Ocean and made many important discoveries.

Cook was the first to sail around New Zealand and reveal the country as two separate islands. Cook was also the first to sail deep into the Antarctic region and uncover the region as a barren ice mass. He was able to disprove the myth of a great southern continent. Cook was the first to map Australia’s coastline. He penetrated farther into the North Pacific looking for a Northwest Passage and mapped more of this region than any other explorer of his era. A significant discovery made by Cook was the discovery, locating and mapping of the Hawaiian chain.  Many of the early navigators in the Pacific had missed the Hawaiian chain entirely. (Story of Hawaii Museum, 2019)

Cook’s famous chart of the Pacific was published in England in 1784 as a part of the 3rd Voyage Atlas. It was issued uncolored as a copperplate engraving. It is shown here in a colored version. Lines illustrate the track of Cook’s ships -Red for the 1st voyage, yellow for the second, and blue for third. On land the Spanish Empire is colored orange, pink identifies the British Empire, while gray shows Russian lands. French territory is light green, Portuguese is purple and Dutch holdings are yellow.

Lahaina Printsellers provides a superior reproduction of the original copperplate engraving from Cook’s Last Voyage, originally published in 1784 by Strahan and Cadell of London.  It traces the tracks of the Endeavour, the Adventure, the Resolution, and the Discovery during each of the Captain Cook’s three voyages of exploration.

As a record of Cook’s historic Pacific discoveries, this is the most accurate and important world chart of the 18th century and, as such, is considered the first modern world map.

To purchase this map on canvas:  Shop Here.