The Tradition Of Hawaii’s November Feast

The Tradition Of Hawaii’s November Feast 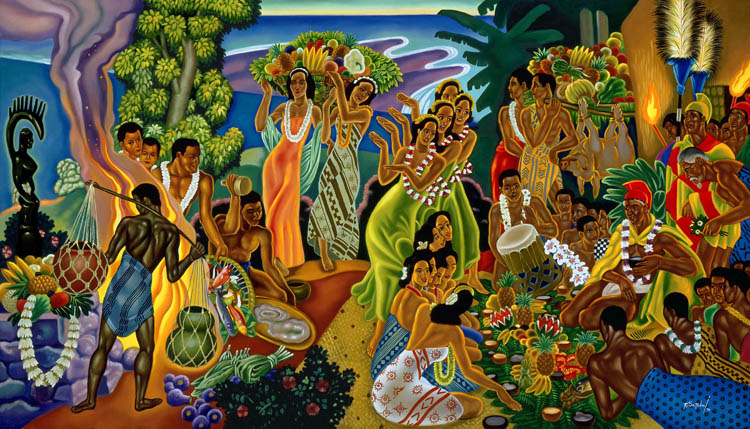 The rising of Makaliʻi at sunset marks the beginning of the Hawaiian new year, known as Makahiki. Makahiki usually begins mid-November and ends in late January or February, aligning with the rainy season. It is a time set aside for tribute, harvest, sport, and play.

The word Makahiki can refer to a time of celebration, the ceremonies and activities observed during this particular time of year, or a complete calendar year. Traditionally for Hawaiians, our calendar year is divided into two seasons, Kau and Hoʻoilo. The month of ʻIkuā, which means “noisy,” usually begins in September or October. This month is characterized by roaring surf, thunderstorms, and rain. This boisterous personality of ʻIkuā signaled the approach of Makahiki.

The roughly four-month period of Makahiki was a time of peace and plenty, relaxation and games, and for harvest. During Makahiki, the qualities of Lono were celebrated by feasting, competing in sport and games, hula and storytelling.

The fine art piece listed above is titled Island Feast by Eugene Savage. This fine art piece depicts a traditional Hawaiian feast filled with the traditional dance of hula, and various fruits composed by Ali’i chiefs and Maka’ainana.

Over the years, we have amassed an inventory ranging from Local Artists and Maps to the golden age of Hawaii’s nostalgia. We reproduce some of the most influential artist’s paintings of the early history of Hawaii such as Charles Bartlett, Eugene Savage, and John Kelly.