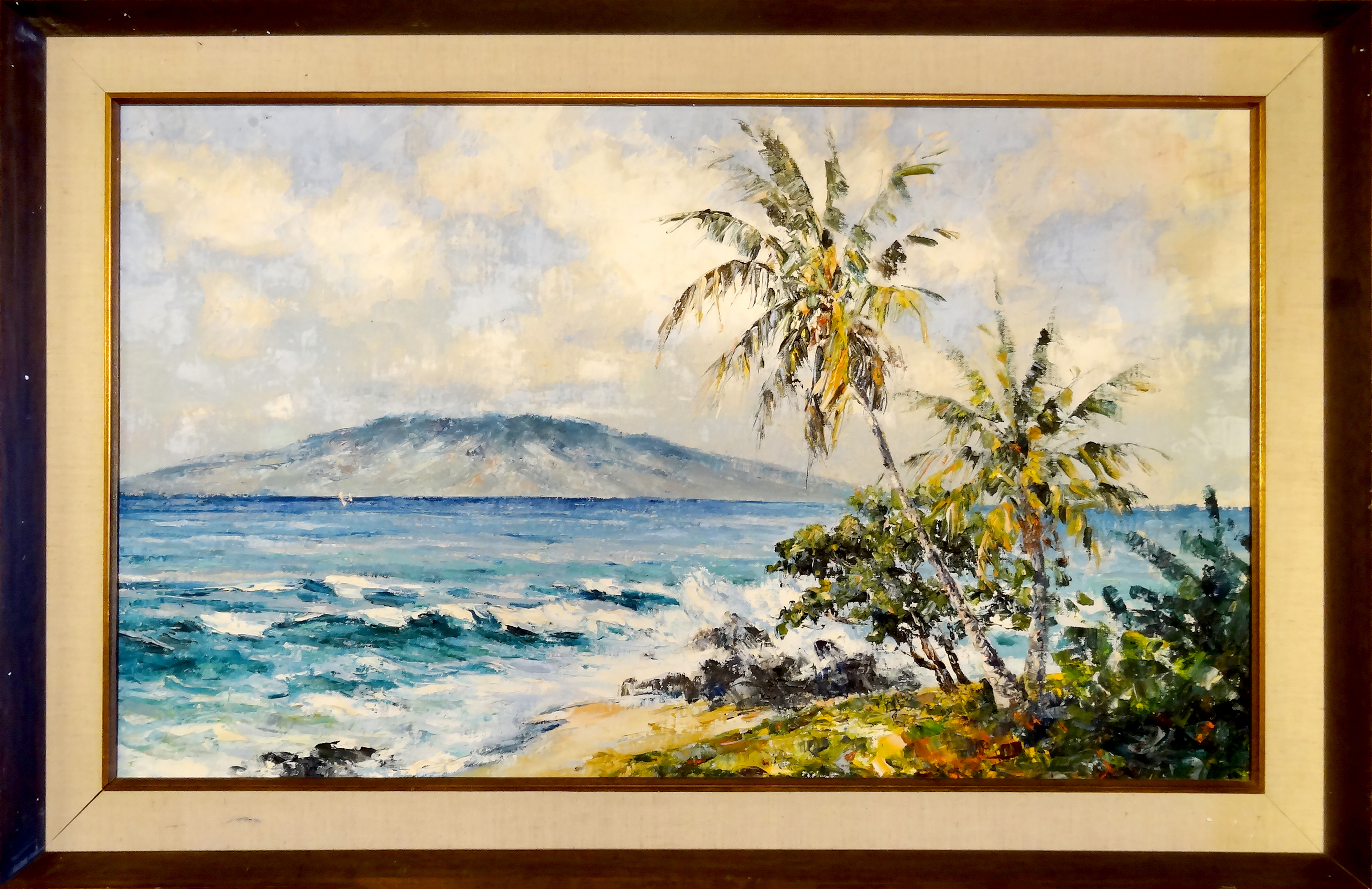 The paintings of Hajime Okuda (1906-1992) evoke the
warmth and luminosity of the great French Impressionists
while capturing the beloved memories of mid-century
Hawai’i. Reminiscent of Monet’s brushwork, Renoir’s
vibrant colors, and Van Gogh’s expressive composition,
Okuda’s work places him at the forefront of Hawaii’s paletteknife painters of the second half of the 20th century. Demonstrating sophisticated technique, Okuda applied
jewel-colored highlights on rich earth tones to build
memorable landscapes filled with power and depth. Another
remarkable trait of Okuda’s oeuvre is his range: scenes of
historic Honolulu, dramatic vistas of Windward Oahu, views
of snow-capped Mauna Kea from Hilo Bay, the activity of
the waterfront, and glowing seascapes from Wailuku to Lahaina. 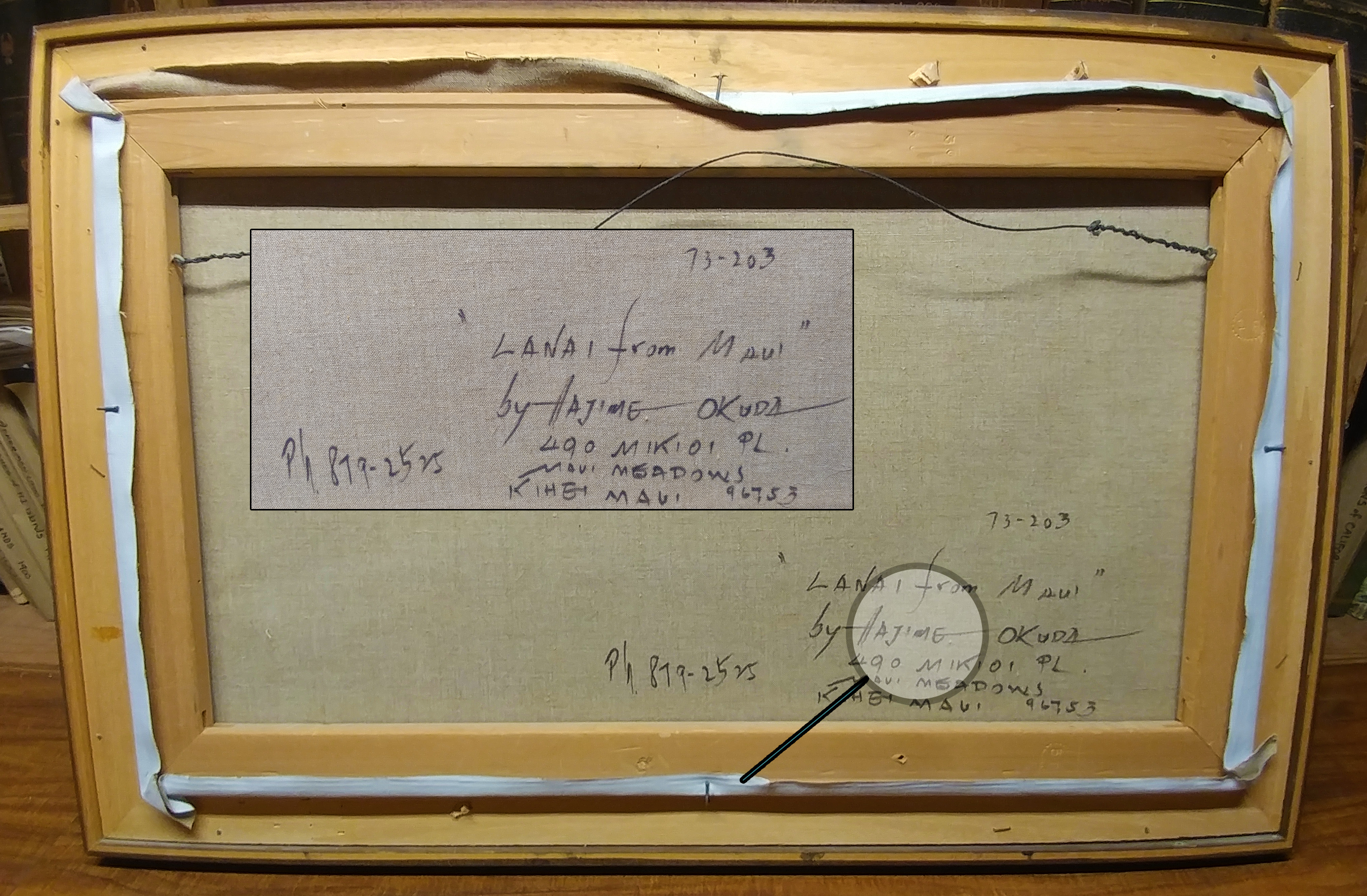 – back side depicting the title, address and artist signature

Okuda’s vision of becoming an artist began when he was a
boy in Japan. Born in Kumamoto, Japan, he was six months
old when his parents moved to Hawai’i and left him to be
raised by his widowed grandmother. In first grade, Okuda’s
talent as an artist became apparent; he earned A+ on his
artworks and sketched and painted every chance that he
had. Okuda sent samples to his parents in Hawai’i and asked
them to send him money for art supplies. He dreamed of going to America to become an artist, and at
age 16, he set out to fulfill his dream when he joined his
parents on Maui. Initially, he had to work instead of attend
school—in particular, art school—and held jobs at Hawai’i
Times and Hawai’i Hochi as a “printer’s devil” or apprentice.
Later Okuda became an inter-island traveling narrator of
silent Japanese films and entertained listeners of radio station KMVI by reading stories such as Les Miserables. 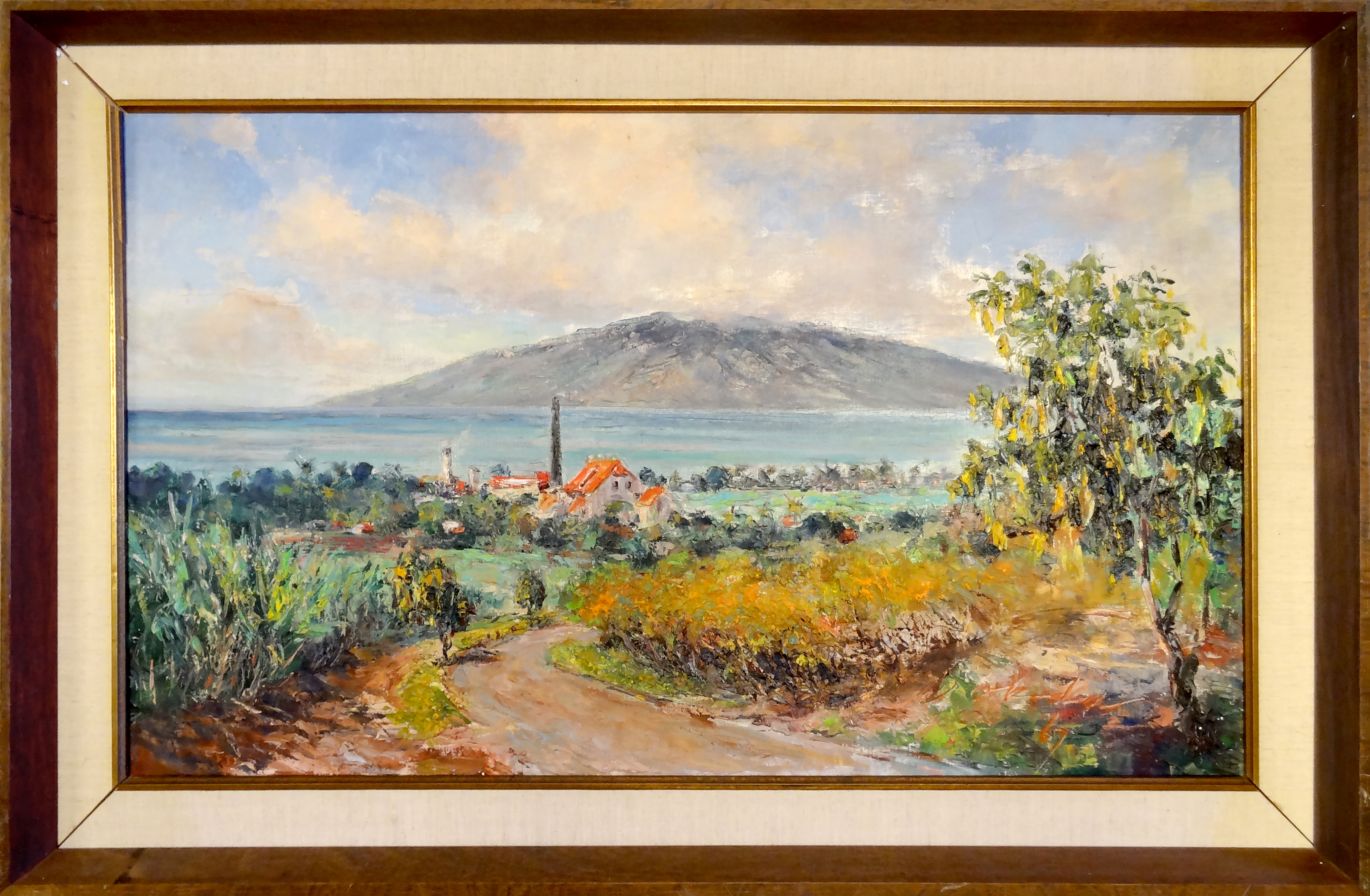 During World War II, these Japanese programs ceased to be
aired so Okuda went to work at the HC&S Puunene Mill, a
subject for a later painting commissioned by Alexander and
Baldwin in commemoration of its 1900 incorporation. For the tourist industry, he designed Hawaiian floral block-print
patterns that became profitable enough for him to start the
H. Okuda Grocery Store in Wailuku. The Okuda Store became not only a highly successful business but also a local landmark. When Hajime was widowed with two daughters, his love for both family and art grew when he married Oshino Tempo, a
widow and artist with two daughters. With the support of his
growing family, Hajime established the successful Maui
Supermarket in 1950 and kept his dream to become an artist.
Each week Hajime painted his sale items on the windows of
the market in water paint, then washed them off with a hose.
His first major permanent works were 30’ x 6’ wall murals of
an underwater scene and the Maui landscape. 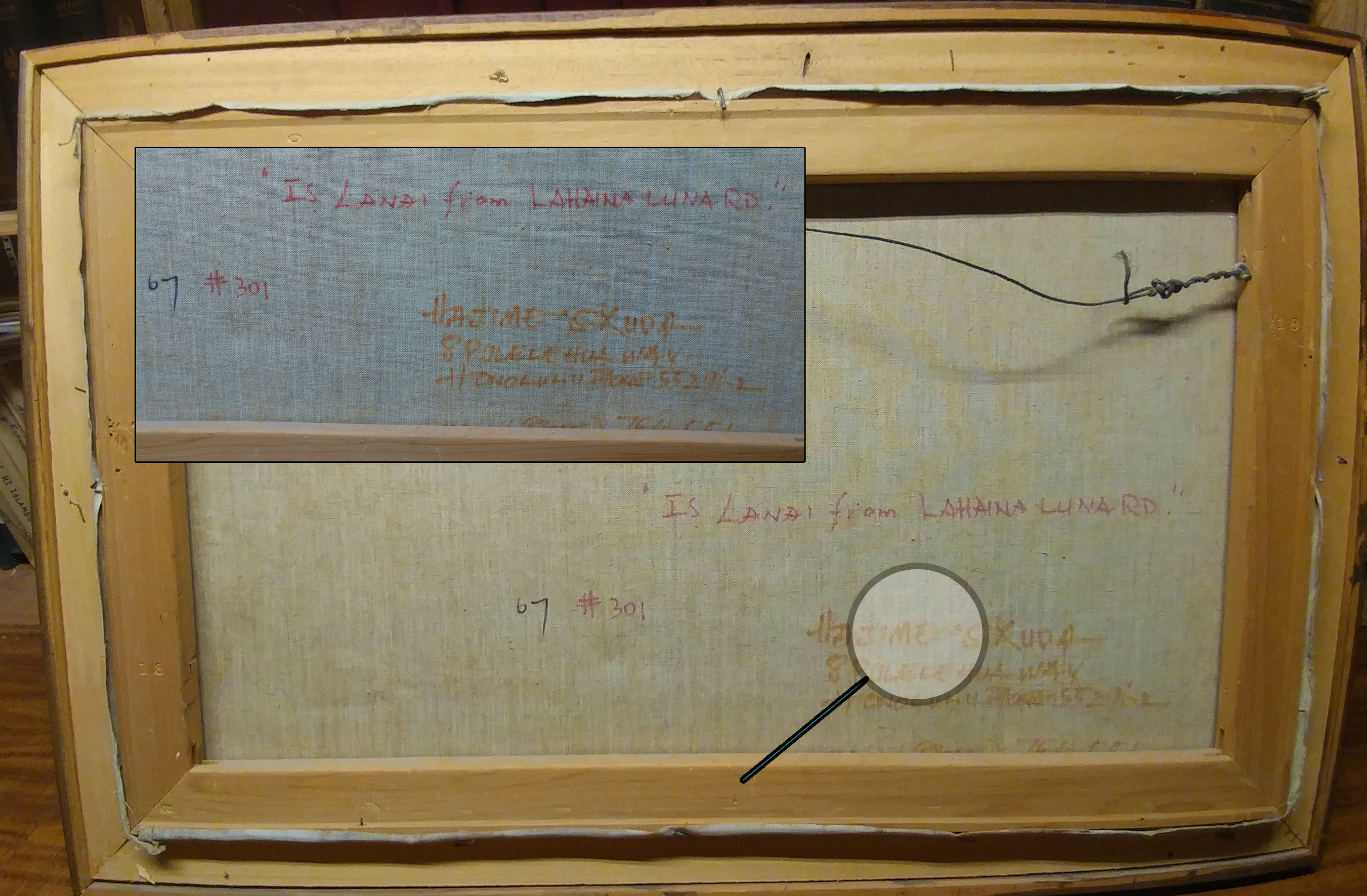 – back side depicting the title, address and artist signature

In 1958 Okuda decided to become a full-time artist. With the
encouragement of Oshino, he sold the store, and moved to
Honolulu to study at the University of Hawai’i and the
Honolulu Academy of Arts. Under the tutelage of artists John
Young, Wilson Stamper, and Peter Hayward, Okuda became
a successful member of the first generation of palette-knife
painters in Hawai’i. “You could say that life began for me in
1962,” he said when he won first prize for his painting Old
House in the Association of Honolulu Artists show.Okuda won
numerous awards, held seven one-man shows, and exhibited
in major galleries both in Honolulu and on the mainland. His
work has been acquired by many private collectors and
businesses and displayed at the Mauna Kea Beach Hotel,
Hotel Hana Ranch, Whalers Village Gallery in Lahaina,
Honolulu Pacific Gallery, and the Robert Hall gallery at the
Ilikai Hotel. Okuda’s works are increasingly sought-after by
major local collectors.